Solar would-be users often worry if it is possible to have efficient solar in winter.

The answer is yes.

Contrary to popular belief, solar in winter is possible! Your solar energy system can generate a lot of electricity in the winter.

Solar users have reported that even in the dark winter months, their solar panel system still provided them electricity.

Summer can be the most ideal time that solar can be the most efficient, but you might be surprised that there are days even in the middle of winter when you can generate a lot of electricity.

Your system can still provide enough renewable energy even in cold climates to power your home.

Summer is the best time when solar panels generate the most electricity.

For example, as a basis of comparison, a solar panel system can generate electricity with an average total generation of 717 kilowatt-hours in July. December produces only 122 kWh, which is just 17% as much as July.

You might be surprised that the best solar energy output is during spring, not summer.

Why do solar panels work better in the cold?

The reason for this is that solar panels produce less electricity when it’s hot. You will see this characteristic of solar panels listed in the specifications on your solar panel datasheet.

It is a common phenomenon that even when the temperature drops, you will still experience solar panel efficiency in winter.

This is because of the power temperature coefficient which indicates how strongly the PV system output depends on the cell temperature or the surface temperature of the solar panel.

In other words, a solar panel will underperform with each increase in degrees Celsius of the temperature of its surface.

How much electricity do solar panels generate in winter? Depending on where you live, your solar generation will look different from other solar users who live in a different location because there are different numbers of sunny days in each city.

Just remember that even in below-freezing weather, solar panels can turn sunlight into electricity. This is because solar panels work on light, not heat. More specifically, daylight, not sunlight.

While summer is the optimum weather to generate optimum electrical production, there is still more than enough daylight to make solar panels a viable option for California energy consumers, even on a typical winter day. 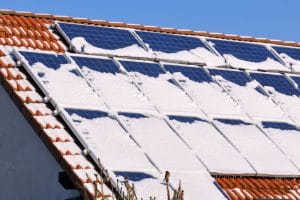 Cold and bright days are ideal conditions that pave the way to solar panel efficiency in winter.

On top of that, you can make sure that your panels are at an optimum angle to improve their efficiency. The optimal angle for your panels will be lower because the sun is lower in the sky.

Some systems will allow for the infrequent manual altering of the tilt over the year.

You can choose this type of solar panel system so that you can request your installer to adjust the angle to optimize your system.

The Best Solar Panels For Winter Use

To make the most out of your solar in winter when your panels harvest energy more efficiently, here’s a list of the best solar panels for winter use:

If you live in a palace where you get tons of snow, don’t choose a vertical orientation for your panels.

Snow tends to slide down to the edge of vertical panels making them less productive when snow begins to build up starting from the edge.

Solar panels have strings of solar cells that run horizontally and when you block one end of each one of these strings, you are limiting its solar productivity.

With horizontal panels, the orientation of the system racks matters, too. 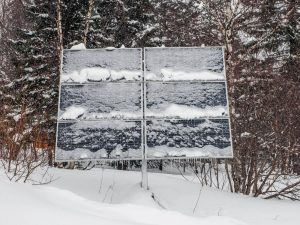 Research shows that horizontal racks hold snow beneath their panels, preventing them from dropping to the ground. This can potentially freeze and block snow on the panels from coming down.

So, the best solar panels for winter use are those that are horizontally-oriented vertical-mounted panels.

When your home doesn’t have a traditional gable roof, but a hip and valley type that includes multiple roof surfaces, it is best to place your panels on the narrower, Southside of the house.

You may also get solar panel efficiency in winter when your roof is narrow and tall by choosing a vertical layout.

Winter and snow have their setbacks when it comes to solar generation.

However, you can still experience solar panel efficiency in winter by purchasing and installing an adjustable solar mount.

These are among the best solar [panels for winter use because you can adjust their tilt as frequently as you want.

Most people use this feature to maximize their solar output since the ideal tilt angle for solar panels varies throughout the year.

For example, during winter, you can set your solar panels to a much steeper angle to help with snowmelt and coverage.

The steeper the angle, the easier it will be for snow to drop or slide off your solar panels. The faster the snowdrops, the better your solar output will be.

It is important to take note that when you are choosing the best solar panels to use for winter, the panel’s orientation and the mounting system should be customized to the unique features and design of your home without sacrificing efficiency.

Ask your solar installer about the different brands of solar panels. They should be able to assist you in determining exactly the panels and racking that will work best for your roof and climate.

In the winter, there are typically shorter daylight hours which will cause your solar panels to produce less energy as compared to what they would during summer when daylight hours are longer.

But this should not discourage you from installing a solar panel system.

Solar in winter is possible.

You can enjoy reliable renewable energy even in cold climates because your solar panels still convert visible solar light into electricity that will power your home during winter, even with fewer daylight hours.

Solar Sun Surfer is one of the leading California solar energy companies providing one of the most promising forms of renewable energy out there.

While we are a relative newcomer to the solar game, we aren’t new to the technology nor inexperienced in the areas that count when it comes to doing quality installations, customer service, repair, and maintenance on all solar power panels, water heaters, and pool heating equipment whether it’s for residential or commercial locations.

How Home Solar and Batteries Can Replace a High Utility Bill

What Our Clients Say

Getting a solar panel for home is the best decision I’ve made. It has helped me save from electric bills, plus it’s so friendly to the environment.

I didn’t know how much I spent on energy for my water heating until I encountered Solar Sun Surfer. I got their solar heating a few weeks back and it’s the same as my regular heating, only it saves me money from electrical bills. You guys are lifesavers!

I’m so glad I ran into this place. I’ve been looking for a trusted solar company within my area since I moved, but nothing has caught my attention yet. Until Sun Surfer Solar came along. I love the solar water heating since it has the same function and features of my regular heater, but reduce the burden of energy bills going through the roof.

I recommend this company for their dedication to solar. And great service of course. There are so many solar companies in California alone, but for me Solar Sun Surfer is my go-to place for everything solar; panels to heaters.